PreviousNext
Come along to our free event to celebrate Shakespeare Week. 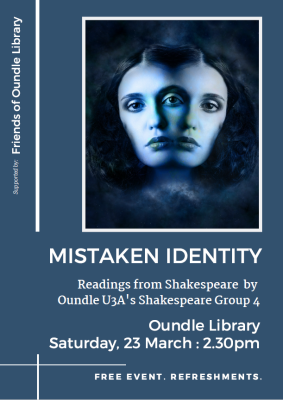 Whether it’s because of magic, or disguise, or simple human error, William Shakespeare often used mistaken identity as a plot device in his plays – particularly the comedies. And that’s one of the reasons it’s been chosen as the theme for this year’s celebration of Shakespeare Week at Oundle Library.

We've organised ‘Mistaken Identity – Readings from Shakespeare’ with the help of Oundle U3A’s Shakespeare Group 4. Don't be daunted by the idea of a Shakespeare 'session' because this will be an entertaining afternoon! The scenes which have been chosen are engaging, funny and mostly well known. And they're from a number of different plays, including the Comedy of Errors, Twelfth Night, the Merry Wives of Windsor and the Merchant of Venice.

‘Mistaken Identity – Readings from Shakespeare’ will be at Oundle Library on Saturday, 23 March @ 2.30pm. This is a free event. Refreshments. Everyone welcome!