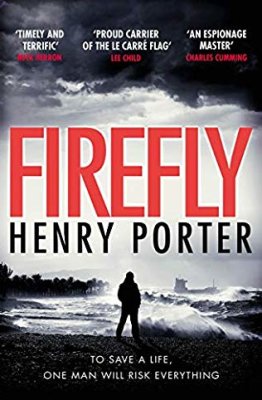 Why have I never discovered Henry Porter before? On the basis of Firefly I have to read more because this is a great story, beautifully written, and the first in a series which features former MI6 agent, Paul Samson.

It’s the story of Naji, a 14-year old Syrian refugee who is struggling to reach Germany so his family can follow him there. But Naji is special. Codenamed ‘Firefly’ by the authorities he is thought to hold details of terrorist cells in Europe and their plans. Paul Samson is asked to help European security services find Naji and get him to safety. And it’s a race against the clock because the boy is also being pursued by IS.

All this might not sound startlingly different from many espionage thrillers but this book is more than a cut above, in my opinion. What makes it stand out is that it’s minutely plotted and entirely gripping. It’s a novel of small details. From the difference between red and blue lifejackets, to the importance of a plastic sheet, and the refugee trail from Syria to Europe is sensitively conveyed. All the characters feel real and the pace of the story is steady but urgent.

So who is Henry Porter? Well I discover he is a journalist who’s written for most of the big newspapers, who is now the London Editor of Vanity Fair magazine. He’s written a series of three books about a spy called Robert Harland, a children’s book, and two standalone novels. In addition, there’s Firefly, which was published in 2018 and the next Paul Samson book – White Hot Silence – which appeared in June this year.

This book ambushed me. I picked it up at the library by chance but wasn’t sure if it was going to be something I’d enjoy. Before I knew it, I was hooked. It wasn’t difficult to put down but I looked forward to being able to pick it up again. And days after I’d finished it, I was still thinking about the story and the details.

I have to give it 5-Stars.
Cornish Eskimo

Oundle Library’s Crime Fiction Book Group is free to attend and lots of fun. We don’t have a set reading list, so there’s no pressure. We may agree a ‘theme’ for the month and choose the books and authors we want to read within that. Otherwise, we meet and discuss the books and authors we enjoy. We meet at Oundle Library on the third Friday of each month @ 2.30pm. Why not join us? You’ll be very welcome.