The Long Call by Ann Cleeves

PreviousNext
The first in a new series by Ann Cleeves, and a very satisfying read. 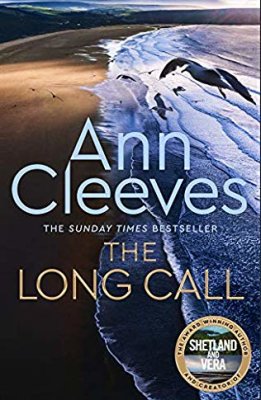 Fans of crime fiction will know Ann Cleeves, and even if you don’t read her books you’ll probably be aware of them through their TV serialisations: ITV’s Vera, and the BBC’s Shetland.

There was quite a kerfuffle when Cleeves announced she’d written her final book about Shetland detective Jimmy Perez. She had, she said, told all the stories about him she wanted to tell and didn’t want to kill off any more Shetlanders. Vera, apparently, has more stories to come. But what was going to fill the Shetland gap?

Well, today, The Long Call is published – the first book in Cleeves’s new Two Rivers series, which is set in North Devon and features DI Matthew Venn. Our book group was lucky enough to be sent copies of The Long Call to read and review.

To summarise: Venn has recently returned to live on the North Devon coast with his husband, Jonathan, who runs a local arts and community centre. Venn left the area many years before, abandoning the religious community in which he grew up and breaking with his family. He’s trying to settle into a new job and build a new life back in North Devon when a body is discovered on the beach near his home.

It takes a while to identify the victim, and as the investigation progresses the dead man is found to have had connections to the centre which Jonathan manages, and even Venn’s family. The case is complex and Venn has to dig deep into the community and the lives of people he knew when he was growing up. Adding to the pressure of running his first major case in his new job, dark secrets must be unravelled – not without danger to Venn himself.

It must be difficult for an author to shut down a successful series and start another. But this one is promising because, as always, it's well written and Cleeves’s characters are believable and human. As you read, you can see them in your mind’s eye and feel you understand what makes them tick. Venn is full of insecurities – professional and personal – and he sometimes seems too vulnerable to be a senior policeman. But he’s determined and dogged, and worries away at clues until he’s resolved them. Slowly but surely, he picks away at the case until everything is revealed.

A few of our group said that when they’d started this book, they’d wondered if Cleeves was just trying to be woke by making the protagonist gay, and married. But it didn’t take them long to change their minds because Venn is written as a strong, solid character and although his homosexuality is mentioned often, it seemed irrelevant.

This is, of course, the first in a new series, so we’re bound to find out more about Matthew (and Jonathan) over time. Freyja thought they were an odd couple, Matthew being uptight and nervy, and Jonathan almost too nice and good to be true. But both of them have interesting backstories and who knows how these could be explored in new plots? There are other characters, like Venn’s police colleagues, who will no doubt be developed in later books as well.

Pink Alpaca loved the book, saying: “Having enjoyed the Shetland series I was intrigued by the thought of a new character and wondered what he’d be like. DI Matthew Venn doesn’t disappoint. Cleeves incorporates some fresh, gritty ideas and slowly ramps up the tension to an exciting climax. The story has a strong plot and excellent narrative, and I found it hard to put down. I also discovered a new fact about Ann Cleeves – she’s passionate about public libraries and was a National Libraries Day Ambassador in 2016.”

So, how did we rate it? Well, the lowest was 3-Stars from Freyja but the rest of us were all 4-Stars and above.

All of us felt The Long Call was a really satisfying read. A book we enjoyed and which we hope will develop into another excellent series. Who knows, it might even work on TV!*

*It’s now been announced that the company that makes Shetland and Vera has already optioned The Long Call.

Oundle Library’s Crime Fiction Book Group is open to any crime fiction fan. We meet at Oundle Library on the third Friday of each month @ 2.30pm. We don’t have a set reading list so you can drop in when you can. Why not join us? You’ll be very welcome.