The Amber Fury by Natalie Haynes

PreviousNext
When is a book a work of crime fiction – and when is it not? 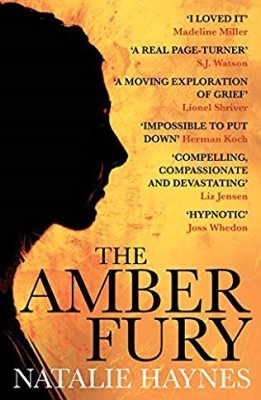 One day recently, while I was browsing the shelves in the library, I started to ponder this question. On the surface it seemed so obvious – there would be a crime of some sort, sometimes there would be a detective, sometimes not, and the story usually progresses in a linear fashion from crime to solution.

Looking through the crime section it was easy; all the books were a variety of crime or thriller and they were all marked as such. So, no surprises there. But when I then started to browse the general fiction shelves, I found a number of books which, from the write-up on the back, I would classify as crime. So, the question came back: what actually makes a book a work of crime fiction? I therefore decided to make myself a private little reading list of books not classified as crime, but which I thought might be candidates, to see if I could find an answer.

And to that end I choose this debut novel from 2014, The Amber Fury (aka The Furies) by Natalie Haynes.

‘Natalie Haynes is a writer and broadcaster. She has appeared on BBC Radio 4 as a presenter of documentaries and she is a reviewer of books, films, plays, television and art. Natalie was also a stand-up comedian for 12 years, and was the first woman ever to be nominated for the prestigious Perrier Best Newcomer Award at the Edinburgh Fringe Festival. She retired in 2009 to spend more time writing.’

So, a good pedigree there, but not an obvious candidate for writing crime. The write-up on the back of this book sounded intriguing. Here it is, slightly paraphrased:

“Alex Morris has lost everything - her relationship, her career and her faith in the future. Moving to Edinburgh to escape her demons, Alex takes a job teaching drama at a Pupil Referral Unit. It's a place for kids whose behaviour is so extreme that they cannot be taught in a normal classroom. Alex is fragile with grief and way out of her depth. Her fourth-year students are troubled and violent. In desperation to reach them, Alex turns to the stories she knows best. Greek tragedy isn't the most obvious way to win over such damaged children, yet these tales of fate, family and vengeance speak directly to them. Enthralled by the bloodthirsty justice of the ancient world, the teenagers begin to weave the threads of their own tragedy…”

This is a story which I found unusual, rewarding, gripping and sad, but ultimately with a light in the dark clouds. The book starts with a murder and ends with a murder. Alex is a young and upcoming theatre director in London, when her life is derailed by a hideous crime. The students in the unit in Scotland are all 15 or 16 years old, some of them highly intelligent and articulate, but all have been placed in the unit for a variety of reasons, bullying, violence, antisocial behaviour and suchlike. One is profoundly deaf after childhood measles which cost her brother his life, and she was placed in the unit after severely beating up her bully at school. A friend stuck by her and ended up with her in the same unit, something which does not endear her to the friend’s mother. One has been moved to Scotland from Sweden by her parent against her will, and decides to punish them and all around her by being totally out of control; another is the violent runt of his family with an unknown father, a drug addict mother and a brother in prison, and so on. You get the picture.

And these are the ones to whom Alex decides to teach the Greek tragedies. These stories were of their time and, as such, utterly acceptable and brilliant. But there is almost nothing in literature as violent – and to our modern eyes amoral – as these stories of incest, rape, murder, sacrifice of women to the Gods, mutilation, revenge etc. Think Sophocles’ ‘Antigone’ and ‘Oedipus’; think Euripides’s ‘Hecuba’ and ‘Iphigeneia in Aulis’, think ‘Electra’. To a well-balanced adult with an ability to see these tales in their own setting, time and place, they are wonderful stories and plays. To an impressionable teenager with a troubled past they are something else again.

To help the children – because that is what they still are – understand the stories, Alex suggests they put themselves into the characters and bring them to life in their minds. In this way the characters and the events become real to the students. As the term progresses the students come to trust Alex and even like her. One in particular becomes obsessed with her. By now they have found out what happened in her past, namely that her fiancé was senselessly murdered, and one of them decides to take an eye for an eye revenge.

Now, one would assume that a sensible adult would think twice about teaching these stories in such a personal way to troubled teenagers, and in fact that is what the legal team representing the vengeful student thinks and they therefore try to cast the blame on Alex. But she is lost in her grief and not thinking straight.

I like Alex very much, flaws and all. I think she is well drawn and believable, although her actions made me at times want to shake her and shout ‘Think what you are doing!’. I won’t say any more about the plot. Read the book and find out more. This is mostly a fine study in grief and how it slowly lessens over time. It is also a study of obsession.

And that brings me back to my original question: crime fiction or not? The story is bracketed by two murders so surely yes, but actually I think not. The murders are there to set the scene, but the story is about grief and about Alex’s growing relationship with her students and her temporary inability (which almost amounts to insanity) to see what harm she is causing.

Do try The Amber Fury and see if you find it as compelling as I did.

As well as all the rest, Natalie Haynes is a classicist. After this debut novel she wrote another book, called The Children of Jocasta – a straightforward retelling of the Oedipus story; and her most recent title A Thousand Ships (the story of the fate of the Trojan women after the sack and fall of their city) was published in May.

Incidentally, a derivation of the classical Greek word for amber is Electra. And Electra was the Greek king Agamemnon’s daughter, who plans the revenge killing of the one who murdered him, his wife Clytemnestra, her own mother.
Freyja.

If you enjoy reading crime fiction why not come along to one of our meetings? They’re on the third Friday of every month, 2.30pm @ Oundle Library. It’s all very informal because we don’t have a set reading list. We do, however, enjoy a wide-ranging chat about the books we’ve read and enjoyed. Everyone welcome.