PreviousNext
A new team, and the start of a new series by bestselling author Michael Connelly. 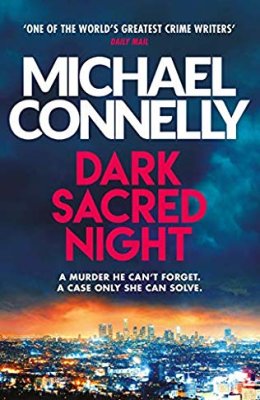 Set in Los Angeles, California, Michael Connelly’s series about Harry Bosch has been running for many years. Now, when Bosch is too old (and troublesome) to be a serving cop, Connelly has paired him up with a new, younger female detective called Reneé Ballard. Dark Sacred Night is the first story of this new partnership and it’s a cracker.

There are 21 books in the Bosch series, with the first (The Black Echo) published in 1992. Bosch is a difficult man – prickly, single-minded and always running into trouble with his senior officers and the LA politicians. Over the years, as his career has progressed and he’s grown older, Connelly has shunted him around different police divisions and departments. By Book 20 in the series (Two Kinds of Truth published in 2017) Bosch has ‘retired’ and is working as a volunteer for the San Fernando police, trying to solve cold cases.

Also in 2017, Connelly published The Late Show, introducing us to a new character, Reneé Ballard. She works in the LAPD but has been pushed to the night shift because she filed a sexual harassment complaint against a supervisor. Working the night shift means she is never allowed to finish an investigation and has to give the cases she’s dealt with to day shift detectives when she goes off duty. Her frustrations are palpable and, against orders, she often finds ways to continue to work her cases night by night.

Fast forward to October 2018 and Connelly publishes Dark Sacred Night, the first book in ‘the new Ballard and Bosch series’. It all looks and feels hugely promising because Ballard and Bosch are alike in many ways - tenacious and incapable of backing down. And the case they work on is interesting: the murder of an underage prostitute which was closed 9 years before as an unsolved murder. They know they’re looking for a serial killer who has never been caught, but there’s very little to work with and sometimes they seem to be grasping at straws as the case takes some unexpected turns.

Threaded through their investigation are the everyday cases that Ballard is working on during her night shifts, so there’s plenty of action alongside the cold case. And there’s the San Fernando cold case that Bosch is working on, which morphs into some very current gangland murders.

I’ve been reading the Bosch series for several years, so I accept I may be predisposed to enjoy the new direction it’s taking. But all in all, I thought this was a very satisfactory murder-mystery. All the different stories are threaded together skilfully and there are no bumps or inconsistencies.

Ballard and Bosch are interesting, tough characters and the pace is good. It was a book that hooked me from page 1 and didn’t let go until the end; and I carried it with me to snatch moments with it when I could, so it’s a definite 4+ Stars. Perhaps more to the point, I’ve made a note that the next book (The Night Fire) will be published later this month. I’ll be looking out for that.
Cornish Eskimo

If you enjoy reading crime fiction feel free to drop in to one of our meetings. We get together at Oundle Library on the third Friday of each month @ 2.30pm. Don’t worry about catching up with a set reading list because we basically read what we want. At our meetings we discuss all the books and authors we’ve enjoyed and it’s a great way to expand your reading list.