If I Should Die by Matthew Frank 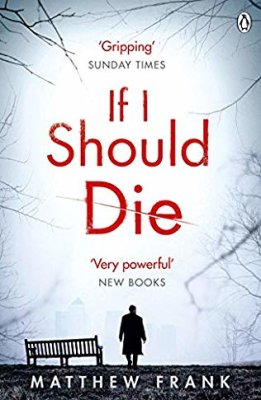 Joseph Stark is starting a new job as a Trainee Investigator Constable, working out of a police station in Greenwich. He is still recovering from a long spell in hospital, having been blown up by an IED in Afghanistan, where he was serving with the Territorial Army. It is hinted that the story surrounding his injuries is anything but straightforward but we are not told whether it is good or bad.

Soon he’s part of a police investigation into a series of attacks on homeless people, which slowly spirals into a complicated case involving organised crime and ends with an exciting standoff.

If I Should Die is the debut novel of Matthew Frank. Published in 2014 it (deservedly, in my view) won the ‘Waverton Good Read Award for Best British Debut Novel of 2014-15’. I picked up the book at random at the library, thinking it looked interesting but with no idea of just how good it would be.

I say the investigation ‘slowly spirals’ because as I read this book the story grew inexorably, although nothing felt contrived or artificial. The plot is developed carefully and layers are added as the cast of characters grows larger. But every step-change feels organic, and what I thought might be a fairly straightforward and ordinary story turned into something complex, gritty and entirely believable.

As the investigation proceeds the reader is given more detail about Stark’s back story. The pieces of the puzzle are revealed sparingly, so when you finally discover what happened in Afghanistan it’s almost a surprise. The knowledge smooths out some of the rough edges of the plot and brings a feeling of completeness to the whole.

I hated to put this book down, so as soon as I’d finished it I went back to the library to find Book 2 (Between the Crosses) which was published in 2016. This was just as compelling and I’d give that 5-Stars too. Now I’m waiting and watching for the next book in the series.

If there's a long gap between these books being published I’m guessing it’s because Matthew Frank seems to be a part-time author, fitting his writing around his family and his work as an architect. His website says that Book 3 is “well underway” and I’m hoping it will be published soon.

I'm delighted to have discovered Matthew Frank. His characters are so well written you feel you could touch them; there’s nothing superfluous in the story and the plot rolls along at a steady but compelling pace. To my mind the writing is really clever and interesting. I give it 5-Stars.
Cornish Eskimo

P.S. I recommended Matthew Frank to our book group and If I Should Die is now doing the rounds. So far both Freyja and Pink Alpaca have read it, and each awarded it 5-Stars as well. So if you can find it, do read it!


In our book group we don’t all read and discuss one book each month. We read what we like, and meet to chat about the books and authors we’ve enjoyed. We view our group as a means to grow our reading lists and enjoy the company of other crime fiction fans. If you think it sounds interesting, come along to one of our meetings! We get together on the third Friday of every month at 2.30pm in Oundle Library. Everyone welcome.