The Better Sister by Alafair Burke

PreviousNext
A book about sisters and a family crime. 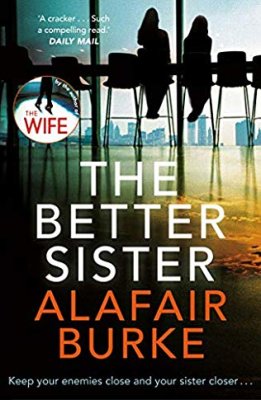 Some time ago I read a book called The Second Sister by Claire Kendal, which was an exceptionally good thriller – 5-Stars at least. So, when I saw The Better Sister by Alafair Burke (2019), almost by subconscious association I picked it up thinking it would be as good. It wasn’t. Not quite. But don’t get me wrong it’s not bad, just not outstanding. It is certainly good enough to recommend.

Alafair Burke is a Manhattan-based writer of crime novels, some standalone, some part of a series. She is a former prosecutor and is now a professor of criminal law in New York.

The Better Sister is a standalone psychological thriller. As the title suggests the plot revolves around two sisters – Nicky and Chloe. The blurb says this about it:

'Though Chloe was the younger of the two Taylor sisters, she always seemed to be the one in charge. She was the honour roll student with big dreams and an even bigger work ethic. Nicky - always restless and more than a little reckless - was the opposite of her ambitious little sister. She floated from job to job and man to man, and stayed close to home in Cleveland.

For a while, it seemed that both sisters had found happiness. Chloe earned a scholarship to an Ivy League school and moved to New York City, where she landed a coveted publishing job. Nicky married promising young attorney Adam Macintosh and gave birth to a baby boy they named Ethan. The Taylor sisters became virtual strangers.

Now, more than fifteen years later, their lives are drastically different - and Chloe is married to Adam. When he's murdered by an intruder at the couple's East Hampton beach house, Chloe reluctantly allows her teenage stepson's biological mother - her estranged sister, Nicky - back into her life. But when the police begin to treat Ethan as a suspect in his father's death, the two sisters are forced to unite . . . and to confront the truth behind family secrets they have tried to bury in the past.'

You have to admit that sounds pretty intriguing. And the tag-line ‘Keep your enemies close and your sister closer’ also drew me in.

The story is a curious mix of thriller and courtroom drama. When Ethan, the 16-year-old boy, is arrested and then put on trial for the murder of his father, Nicky, his mother, comes back into their lives and we find that she is no longer the reckless one but has sobered a lot. We also discover the reason Adam left her and took the boy with him; and that reason is slowly revealed to be not quite what we expect. And we find that Chloe’s life with Adam is not as idyllic as we were thinking. We discover they all without exception had a motive for getting rid of Adam.

I really quite liked this book. I liked the way it was constructed with flashbacks to the women’s past which was both upsetting and nasty. And one particularly unpleasant part was the way the on-line trolls came out of the woodwork with their threats of mayhem and rape as Chloe became more and more successful in her career. That was really quite bad and only too real. But the courtroom scenes, although necessary to progress the plot, were somewhat incongruous and didn’t harmonise with the psychological part of the story. The culprit is eventually revealed and turns out to be rather unexpected.

So why The Better Sister? It seemed obvious at first – of course Chloe with her increasingly successful editor-in-chief job, her deep love for her stepson and her steady marriage was the better sister, not the reckless and drifting Nicky. But it turns out not to be so obvious after all. Nicky has cleaned up her act a lot, got a job, is sober and loves Ethan no less than Chloe. And Chloe, who has built her career on spearheading a campaign of support for abused women a bit like the ‘Me Too’ movement, but aimed not at the rich and famous but at the ordinary woman in the street, the workplace and the home, that Chloe she has secrets which do not quite fit with the campaign image.

One refreshing thing about this book is that it's a crime novel, but the police investigation happens behind the scenes. We, as well as the two women, hear very little, only what the brilliant young defence attorney hired to defend Ethan tells them. They are on the whole both forced to sit back and wait for the various professionals to do their job and let them know what is happening. Chloe in particular finds this difficult and in the end, she does find a way to get her hand in, tell a long and deeply hidden truth which casts just enough doubt to make the police start to look at other options than Ethan.

Certainly, a book worth reading. I give it somewhere between 3 and 4 Stars.
Freyja

If you enjoy reading crime fiction why not join our group? We meet on the third Friday of every month, 2.30pm @ Oundle Library. It’s free to attend and very informal because we don’t have a set reading list. We do, however, enjoy a wide-ranging chat about the books we’ve read and enjoyed. Everyone welcome.