The Evidence Against You by Gillian McAllister

PreviousNext
A book that's so good it stays with you... 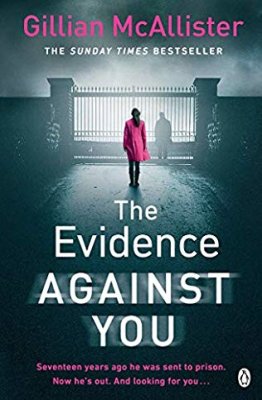 The Evidence Against You by Gillian McAllister (2019) is one of those books that stay with you. You finish it, you move on to something else but still from time to time it sneaks its way back into your head.

The story is simple really. Here is Izzy, a woman living on the Isle of Wight, married to Nick, a police analyst, and running a restaurant with the help of her cousin. So far so ordinary. And then come the shocks, one after the other. The restaurant was started and run by Izzy’s mother, who was murdered by none other than Izzy’s father in a fit of jealous rage. Or so said the prosecution before he was found guilty – in spite of his protestations of innocence – and put away for 18 years. And now the 18 years have passed, Izzy’s father is out and has contacted her. He wants to see her, talk to her and try to convince her of his innocence.

From then on, the story moves back and forth between the past and the here and now. And it moves between the two of them telling the story from their two different viewpoints. Izzy enlists the help of her analyst husband, even using his confidential on-line access to delve into what happened. Initially she does this to affirm her conviction of her father’s guilt but slowly, gradually, her view of what happened begins to shift and she starts to wonder.

I won’t say more about the plot so as to not give anything away.

All the characters are interesting and well-drawn. I liked the timid Izzy who, in spite of her reticence, keeps digging. First to confirm her father’s guilt and get him out of her life (and head) once and for all, but later to look for other solutions. For 18 years she has coasted. Not really living; not much liking her job at the restaurant; going home to eat the junk food which she really likes; and to remember the days before it all happened, when she was a young ballet dancer dreaming of becoming a ballerina.

The father is more difficult to like. Eighteen years ago, before the murder, he was what he himself termed a ‘free spirit’ – painting in his container on the beach whenever the mood took him, but in fact being a thoroughly irresponsible drag and drain on his wife. In the here-and-now he is needy, unsure, determined to strike up a relationship with his daughter, and unable to fit into a life of freedom.

I liked the writing. The book is written entirely in the present tense. This gives the story immediacy and urgency. And the plotting is good as well, subtle and believable. There are no proverbial last-minute tricks out of a hat to show us what happened. The plot just unfolds quite naturally, almost growing in front of our eyes.

The ending is both sad and uplifting. It shows Izzy as a ballet teacher having found peace and the same with her father. But it also shows what many years of incarceration can do. The intensely longed-for freedom can be too much, the outside world can be a place too scary and lonely. This sentiment reminds me of that great film The Shawshank’s Redemption. where too often the men released after many years inside end up not choosing the struggle to adapt to life but instead choosing the noose over the ceiling beam.

A good book worth the time it takes to read it. 5 stars.
Frejya.

Oundle Library’s Crime Fiction Book Group is free to attend and everyone is welcome! We don’t have a set reading list but choose the books and authors we want to read and discuss those. Sometimes to read to a ‘theme’ or pick an author we all want to try. We meet at Oundle Library on the third Friday of each month @ 2.30pm. Why not join us? You’ll be very welcome.