PreviousNext
In our opinion this is a humdinger of a debut novel! 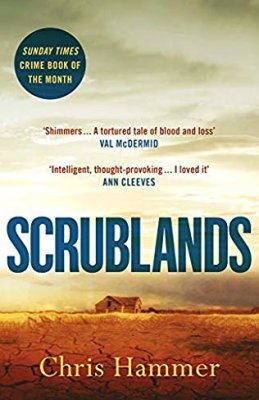 Is it our imagination, or might Australia become a new sub-genre, rather like Scandi-noir? More Australian authors seem to be having their books published in the UK and that’s great news because the ones we’ve read so far have been gripping.

Chris Hammer is an author we’d never heard of before. We read his debut novel, Scrublands, hard on the heels of The Lost Man by Jane Harper. Both are set in the Australian outback but this is really all they have in common. While The Lost Man is tightly focused on one family, Scrublands encompasses a town and is written as a more traditional crime story.

To summarise: Riversend is an outback town that’s on its knees and dying. After years of drought it hit the headlines when its parish priest shot dead five men, before he was himself killed by the police. A year later, journalist Martin Scarsden arrives to write a feature on how the town is coping. As he works to gain the trust of the townspeople and find angles for his article he realises that the accepted version of events is far from the truth.

While trying to get to the bottom of what really happened the bodies of two missing backpackers are discovered, and suddenly Scarsden finds himself in the limelight and at the centre of a new media-storm.

When it was published in Australia in 2018, Scrublands became an instant bestseller; and this year it won the UK’s Crime Writers' Association John Creasy New Blood Dagger award. The plaudits are deserved because this is a really good novel which hooks you in very quickly and doesn’t let go.

Years ago, this book would have been described as a ‘rattling good yarn’ because the pace never dawdles. The plot is as complicated as you’d expect it to be, involving numerous characters in the town as well as the local, county and state police. Even the Australian Security Intelligence Organisation (ASIO) is involved.

Chris Hammer has an eye for detail and atmosphere, and he manages to convey the hardship of life in an outback town, as well as the impact the drought has had on the people and the land. As Scarsden slowly unpicks the clues his investigation sometimes jumps off in unexpected directions, or is side-swiped by events, but the original shooting is, of course, ever-present in the background.

A couple of our group found the novel overlong but the rest of us enjoyed it thoroughly, getting immersed in the story and the heat! If we’re nit-picking, none of us thought the ASIO agent would have been so helpful to Scarsden; and some wished the reader was told a bit more about how the priest had got so deeply into the situation that triggered the shooting. But these comments seem churlish because none of these things spoil the story at all.

All of us agreed that our discussion of Scrublands had been skewed because we kept referring back to The Lost Man, which wasn’t fair because the two books are really very different. But undoubtedly if we’d read Scrublands first, we’d have heaped more praise on it. As it was, everyone really enjoyed Scrublands and rated it highly. The best score was 4+ Stars and the worst 3+ Stars, so do try to find a copy because it's well worth reading. We're all now looking out for Hammer's new novel - Silver - which has just been published and again features Martin Scarsden.

Life’s too short to read a book you don’t enjoy! So our book group doesn't have a set reading list. We may sometimes pick a broad ‘theme’ and read one or two books around that. But otherwise we read what we like and then discuss the books and authors we’ve enjoyed. We meet at Oundle Library on the third Friday of each month @ 2.30pm. Why not join us? You’ll be very welcome.