PreviousNext
The 29th book in the Prey series. 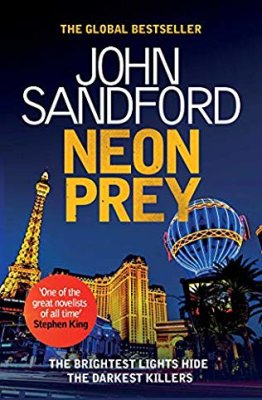 I’m a dyed-in-the-wool fan of John Sandford so I accept I may not be the ideal or most objective reviewer of his books. Maybe you won’t want to read any further; and I’m happy with that and understand why. But I’m still going to write about his latest novel Neon Prey because I loved it – so there!

The thing is, the Prey novels hooked me years ago, and I’ve followed Lucas Davenport’s career through the Minneapolis police force, the state police, and now as a deputy US Marshal. He is now, in fact, a rather ‘special’ US Marshal in that he was appointed by a politician and isn’t based in any Marshals office. As his expertise is ‘chasing down hard-core killers’ he can pick cases to work on – or they pick him.

Neon Prey is the 29th book in the series and is about the hunt for a mob ‘enforcer’ called Clayton Deese, who jumped bail in Louisiana. When the FBI and Marshals had turned up at his home they discovered Deese was also a serial killer who had about 12 bodies buried in the swamp behind his house. There was also evidence that he’d eaten some of his victims. Davenport is called.

Deese has run to Los Angeles and hooked up with a gang who specialise in raiding the homes of the very wealthy. So, the action moves from New Orleans to Los Angeles, and then to Las Vegas as the gang tries to keep one step ahead of the law.

If you boil it right down, I guess Neon Prey is a chase novel. But the characters and plot keep things bowling along and it’s a real page-turner. Davenport has Bob Matees and Rae Givens working alongside him again, as well as an FBI agent called Tremanty. The criminals are unpleasant and vicious, and the world they operate in is filled with sleaze-balls and low-lifes. It’s a wonderful mix.

Of course the villains get their come-uppance in the end, but along the way the plot meanders through robbery, extortion, kidnap and homicide. (Written down like that it doesn’t sound pretty, but that’s crime fiction for you!)

There’s so much I love about these novels. Over the years I feel I’ve come to know the main characters and care about them. The stories are interesting and gritty, and the dialogue is full of humour. In fact, I usually find myself laughing out loud at some of the exchanges. Not because they’re overtly comic but because they seem so true-to-life and feel real. I can’t put my finger on any single thing that makes them stand out from other books but I count the months between publication dates and I have all the 29 books on my bookshelves.

By turning Davenport into a US Marshal, John Sandford has kept the Prey series current and interesting – and the plots can be on a grander scale. Davenport now goes where the cases take him, with no worries about jurisdictions or state lines, or even the politics of dealing with different police forces and law enforcement agencies. Bob and Rae (who also feature in the previous two books Golden Prey and Twisted Prey) are tough characters and great sidekicks. And, reassuringly, Minneapolis is still in the background, with its familiar cast of characters to bring extra depth. God, I love these books!
Cornish Eskimo

Anyone can join our merry little band of crime fiction fans! We meet at Oundle Library on the 3rd Friday of every month at 2.30pm. We don’t read to a list, just the books and authors we enjoy. Then we have a lively discussion where we compare notes and recommendations. If you’d like to come along you’ll be very welcome. NB: We’re not meeting on Friday, 20 December 2019 but will re-convene in January.