The Faroes Series by Chris Ould 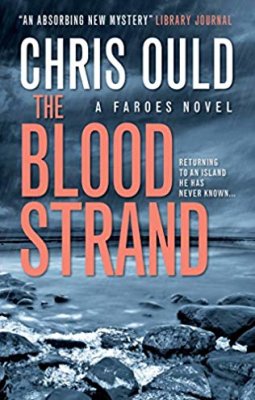 At one of our recent meetings, Eve told us about Chris Ould, a British author she’d discovered quite by chance, who’s written an excellent crime series (three books) set in the Faroe Islands.

Eve read the first book (The Blood Strand) and thought it was so good she immediately ordered and read the next two: The Killing Bay and The Fire Pit. It’s not a series you have to read in the correct order because Cornish Eskimo started with The Fire Pit, which she found at the library, and enjoyed it so much she’s now working backwards.

London-based Detective Jan Reyna was born in the Faroes but left with his mother at the age of three. When she subsequently committed suicide he was adopted and raised in England and has ended up working as a murder squad detective.

We’re introduced to Reyna in Blood Strand when he’s called back to the Faroe Islands after his estranged father has a stroke. Soon after arriving he gets drawn into a murder case but alongside the investigation he’s trying to find out more about his family. Eve describes it as “the story of a small community and uncomfortable family histories”. She gives it 4-Stars because as well as being an interesting plot, the characters and location are fascinating.

The second book – The Killing Bay – continues the story of Reyna’s exploration of his long-buried family history. As a detective in the Met (albeit suspended) Reyna is drawn into helping the Faroese police with a murder investigation when an anti-whaling protestor is killed during a traditional whale hunt. Eve’s summation is that this is a complex story which builds to a thoughtful and satisfying conclusion and sets the scene for book three. Another 4-Stars.

The third novel (The Fire Pit) has Reyna back in London briefly trying to sort out his work problems. Frustrated and angry at the way the internal investigation is going he hands in his notice and travels to Denmark to find out more about his mother’s suicide 40 years earlier. Meanwhile, on the Faroes the police are investigating a 40-year-old case of abduction and rape, and this case becomes entwined with Reyna’s search. This book is full of action, with overlapping stories and some familiar characters. At the conclusion Reyna has found some of the truth of his family history and returns to London, his future uncertain. Five stars.

All three books are atmospheric with interesting characters and unusual mysteries. They have the same feel as the Shetland series by Ann Cleeves because they're focused on small island communities. But while Cleeves's hero, Jimmy Perez, is firmly embedded in the Shetlands and knows everyone, Reyna is a stranger - an outsider looking in at people and places he can't quite understand. Because of this the stories are intricate and very satisfying to read.

We now know that Chris Ould is an award-winning screenwriter who has worked on many successful TV series as well as writing novels. Fire Pit was published in 2018 and we haven’t been able to find out whether there’s another Faroes series book in the pipeline. We hope there is, because these are really enjoyable mysteries and we recommend them highly.

If you enjoy reading crime fiction why not come along to one of our meetings? They’re on the third Friday of every month, 2.30pm @ Oundle Library. It’s all very informal because we don’t have a set reading list. We do, however, enjoy a wide-ranging chat about the books we’ve read and enjoyed. Everyone welcome!