The Chameleon’s Shadow by Minette Walters 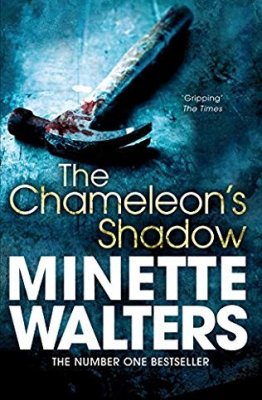 At a recent meeting of our crime fiction book group we talked about a debut novel called If I Should Die by British author, Matthew Frank. It features a young policeman who served in Afghanistan and was badly injured by a roadside bomb. We all rated the book 5-Stars and our discussion caused me to remember an old favourite: The Chameleon’s Shadow by Minette Walters (2007).

Minette Walters is a writer of crime fiction and also, more recently, of historical fiction set at the time of The Black Death. Her first novel – The Ice House (1992) – won the Crime Writers’ Association John Creasey Award for best crime novel that year. Since then she has written 12 crime books, two historical novels and a number of short stories.

I’ve always liked her unusual crime books. They are not classic crime stories with a detective solving a murder - at least not a sympathetic and diligent detective. Nor are they psychological thrillers of the usual sort where a damsel in distress is rescued by her own efforts, or by the efforts of some man. They are much more complicated than that. Her themes include isolation, family dysfunction, rejection, marginalisation, justice and revenge, so a broad spectrum there.

But let me explain a bit about this book. This is what Fantastic Fiction says about it:

"When Lieutenant Charles Acland is flown home from Iraq with serious head injuries, he faces not only permanent disfigurement but also an apparent change to his previously outgoing personality. Crippled by migraines, and suspicious of his psychiatrist, he begins to display sporadic bouts of aggression, particularly against women, especially his ex-fiancé who seems unable to accept that the relationship is over. After his injuries prevent his return to the army, he cuts all ties with his former life and moves to London. Alone and unmonitored, he sinks into a private world of guilt and paranoid distrust ...until a customer annoys him in a Bermondsey pub ...Out of control and only prevented from killing the man by the intervention of a 250-pound female weightlifter called Jackson, he attracts the attention of police who are investigating three 'gay' murders in the Bermondsey area which appear to have been motivated by extreme rage...Under suspicion, Acland is forced to confront the real issues behind his isolation. How much control does he have over the dark side of his personality? Do his migraines contribute to his rages? Has he always been the duplicitous chameleon that his ex-fiancé claims? And why, if he hates women, does he look to a woman for help?"

As the story unfolds we learn more about Charles, about his childhood and about his relationship with Cass, his ex-girlfriend. And both are not so pleasant reading. We also begin to suspect that his paranoia is not entirely caused by his experiences in Iraq but by something which happened before he left. As he drifts on the edge of sanity and destitution he is rescued by Jackson, who is not just a gay female weightlifter but also a highly skilled emergency doctor. She befriends him and is the only one willing to help him.

I liked Charles a lot. He is hugely vulnerable, horribly disfigured, plagued by migraines and memories of the past and single-mindedly intent on re-joining his regiment. When he eventually is told this will never happen, he feels deeply let down – his reasoning being that he was injured while in the service of his country and now he’s being thrown on the dung heap. As he sinks deeper into despair his behaviour frightens everyone around him. Only when he has reached rock bottom, living among the homeless, does his humanity re-assert itself and he begins to see that there are others worse off than himself. And all this time the police are closing in.

I also liked the highly intelligent Jackson. She is very well drawn, sometimes a bit of a bruiser, at other times a very competent doctor. But she’s there for Charles, even when her frightened girlfriend threatens to chuck her out if she doesn’t remove him from their home.

And as for Cass, the ex-girlfriend. Well, you need to read the book to find out what she is.

In particular I like Minette Walters’s style of writing. Interspersed with the straight telling of the story we find inserted newspaper reports, handwritten letters and notes, texts and other things relevant to the story. This is a clever trick. It breaks up the chapters and it gives us a different view of the story as if it is seen with other eyes than those of the author. She does this in all her books.

I can thoroughly recommend this as well as most of her other crime fiction. (I am not so keen on the historical books.) Many of them have been televised over the years and I am sure some of you will remember The Sculptress, The Ice House, The Scold's Bridle, The Echo or The Dark Room. All were highly acclaimed crime TV series in their day.

I challenge you to read this book and not feel sympathy for the beleaguered Charles. 5 stars.
Freyja

If you love having a public library in Oundle why not become a Friend? It’s easy (and free!) to join. Just click here.