Now You See Them by Elly Griffiths

PreviousNext
5-Stars is awarded to the latest book in the Magic Men series by Elly Griffiths... 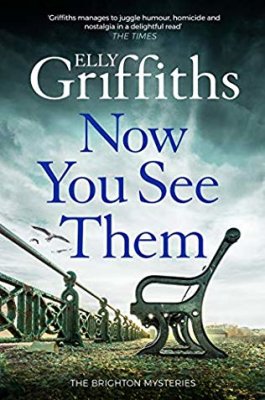 British author Elly Griffiths is perhaps best known for her Norfolk-based mysteries featuring the forensic archaeologist Ruth Galloway. But she also writes the Magic Men series – historical mysteries set in Brighton during the 1950s about Detective Inspector Edgar Stephens and his friend, the magician Max Mephisto. The first of these – The Zig Zag Girl – was published in 2014.

Now You See Them is the fifth Magic Men novel and although it’s still set in Brighton it is now 1964. Between Book 1 and Book 5 Edgar Stephens has married Emma Holmes (a former detective) and they have three children. But while Stephens has been promoted to Superintendent, Emma is no longer allowed to serve in the police force, which she finds enormously frustrating.

During the same period, Max Mephisto has moved to work in America, where he’s found fame and stardom. Now he’s back in England for a brief visit to attend a funeral and to consider a prospective movie job. And so, the team reunites.

In this mystery, the police are under pressure. It is May Bank Holiday weekend and Edgar is engrossed in policing Brighton as the Mods and Rockers arrive. DI Willis is dealing with a case of missing girls. Then a girl is found murdered. When Ruby, Max's daughter, fails to turn up for a rendezvous with Emma he is drawn into the case. Emma and a woman reporter, Sam Collins, have a theory about the case but Edgar doesn't give it much credence, so they decide to put their theory to the test, putting Emma and her children at risk. All hands are needed to catch the kidnapper and killer and deal with the violence on the sea front.

What I love most about these novels is that Elly Griffiths is so good at characterization and supplying the back story of the series. To add interest, familiar figures appear from the Magic Gang of the war and post-war years, and she captures the atmosphere of the time very well. Perhaps more importantly, she writes with a wry sense of humour whilst never underplaying the seriousness of the crimes.

These are books I really enjoy. The stories are engrossing and the sense of time and place is authentic. You don’t have to start reading them from the beginning of the series, so if you see one, pick it up and give it a try. And as for Now You See Them, it’s Book 5 in the series and I give it 5-Stars.
Eve

Our Crime Fiction Book Group is open to all-comers and free to attend. We don’t have a set reading list… we just have a wide-ranging chat about the books and authors we’ve read and enjoyed. We meet at Oundle Library on the third Friday of each month @ 2.30pm. Why not join us? You’ll be very welcome.