PreviousNext
5-Stars for this latest thriller in the Dan 'Spider' Shepherd series... 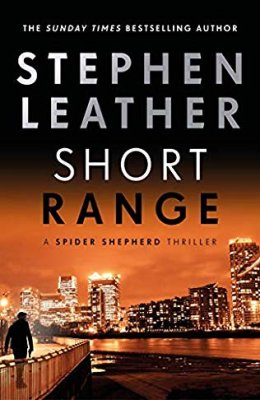 Dan ‘Spider’ Shepherd is so popular he has his own website (www.danspidershepherd.com) which is designed and run by a fan, with the approval of author Stephen Leather. The Spider Shepherd stories kicked off in 2004 with the publication of Hard Landing, and Short Range (2019) is Book 16 in the series and gets 5-Stars from me!

Shepherd is ex-SAS and his ‘civilian’ career has taken him from being an undercover cop for the Metropolitan Police to where he is now, working as a spook for M15. He’s blessed (or cursed) with an eidetic or photographic memory, which means he finds it easier than most to slip into undercover roles. From Book 1 in the series where he was put into a high-security prison to help bring down a drugs baron, to infiltrating a gang of bank robbers or a group of corrupt policemen, Shepherd has run the gauntlet of criminal enterprise over the years.

In Short Range he’s involved in three concurrent cases. The first working with the National Crime Agency on a county lines drug network which involves the Yardies and Albanian gangsters; the second infiltrating a group of British-born right-wing would-be-terrorists planning an attack in the UK; and the third involving people-trafficking, slavery and extortion with his girlfriend’s family in Slovenia. It’s a busy life! And although all this sounds complicated the plot moves seamlessly and excitingly to the conclusion.

In my opinion the Spider Shepherd books are a cut above many thrillers. The plots are always interesting and usually have several strands to them; and some of the books have been spookily prescient. The writing is pacey and sharp and you step onto the rollercoaster in the first chapter, with no hanging around for the story to build.

In addition, Stephen Leather adds enough extra information or plot to make you think about things differently. Sometimes it will just be a villain mouthing off about something which causes you to pause, or it will be a snippet of information that you haven’t heard before that’s suddenly thrown into the mix. I don’t think I’ve read a Shepherd story where I haven’t been pulled up short by something, or been made to think about things slightly differently because of something I’ve read. And because Shepherd is British-based there’s a lot that feels familiar and believable, even though the stories are international.

Don’t get me wrong. These are Thrillers, pure and simple… but with a capital ‘T’. For all the little surprises and extras, essentially they’re terrific stories which I find unputdownable. You don’t get many insights into Shepherd’s soul or emotions. There are times when Leather tries to provide some, but these bits can feel a bit wooden. You get more of Shepherd’s character when he’s working and operating with his colleagues. He is, in fact, a man who exists to get the job done and he does that job very well.

I read Short Range at high speed because it was so gripping I couldn’t wait to see what was going to happen. Once I’d finished, I paused for a day or two and then went back to re-read sections that I’d enjoyed, or which I felt I’d rattled through too quickly. That might sound a strange way to read a book but I’ve done it before with this series. There are, after all, page-turners and page-turners!

If you’ve read Spider Shepherd before, you’ll enjoy this one. And, like me, you’ll be hoping that Stephen Leather keeps the series going. If you’ve never tried a Spider Shepherd book give them a go. You don’t have to read them in order but I recommend the early books because they’re all great stories. My particular favourites are Dead Men (2008), Rough Justice (2010), Fair Game (2011) and Dark Forces (2016). Enjoy!
Cornish Eskimo

Our Crime Fiction Book Group meets on the third Friday of every month at 2.30pm at Oundle Library. We don't have a reading list and we don't do literary criticism, but we do discuss the books and authors we’ve read and enjoyed. If you think it sounds your sort of thing, come along to one of our meetings. Everyone welcome.