Her Sister’s Secret by E.V. Seymour

PreviousNext
A plot with lots of twists and turns which solves a 10-year old crime. 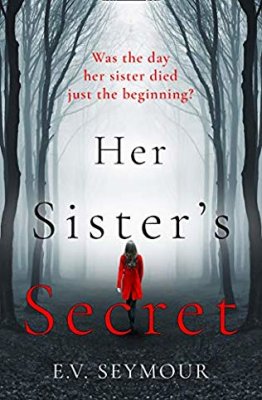 A while back I read and reviewed here a couple of books featuring sisters – The Second Sister by Claire Kendal and The Better Sister by Alafair Burke. They were both pretty good. So, out of idle curiosity I decided to see just how many crime-books our library has on its shelves about sisters. Surprisingly many, in fact. So, I have decided to do my own little private reading list of books with the word ‘Sister’ in the title.

To that end I chose Her Sister’s Secret (also known as Scarlett’s Secret) by E V Seymour. The sisters are Molly and Scarlett. The notes on the back sounded interesting. Scarlett, an upstanding teetotaller young nurse, one morning on the way home from a night shift, causes a fatal road traffic accident. Not only does she kill herself but also a police motorcyclist who was coming the other way. So, two dead people, two devastated families. But things get worse. Scarlett, the dead woman, turns out to have been very drunk at the wheel and eyewitnesses say that she did not try to slow down or avoid the motorcyclist. On the contrary it seemed that she deliberately took aim, speeded up and never took her foot off the accelerator.

Molly, the sister, sets out to find out why this happened, what could have caused her sunny, happy, always sober sister, to do such a devastating thing. And of course, it turns out that there are lots of skeletons in everybody’s closets, including that of the policeman on the bike.

Molly runs an antique business of her own, has a retired Detective Chief Inspector for a father and a drug addicted older brother. She struggles deeply to come to terms with what has happened and feels the only way to find some peace is to know what caused all this devastation. Little does she know what she will unearth.

I will not say more of the plot other than to say that it quickly becomes fiendishly complicated, involving a 10-year old murder, blackmail and organised crime both in London, where her father worked, and in Hereford, where she lives. Add to this a new lover with a secret of his own, who may or may not be on the straight and narrow. And a very unusual ending.

Now, did I like this book? It took some concentration to follow the plot. I feel that if a plot is very convoluted the writing has to be very good to carry all the twists and turns in the narrative. The writing here was pretty OK; maybe not as good or as tight as it could have been, but not bad and there was lots of excitement. Only once did the author resort to the age-old cliché of the heroine going out on her own to meet someone, who was most likely a bad one, leaving me thinking: ‘don’t go, you silly woman. Have you not read all the potboilers where the heroine does just this sort of thing?’.

So yes, I quite liked it. Not on par with the other ‘Sister’ books I have so far read, but certainly worth the effort and I’d give it 3.5 Stars.

E V Seymour is the author of ten novels, all of the crime variety, and she has had a number of short stories broadcast on BBC Devon. This is only her second stand-alone thriller; all the others feature the same detective. As well as writing crime fiction she also works as a freelance editorial consultant, specialising in crime fiction and thrillers. I will look for other books by her once I have worked my way through some more ‘Sister’ books.
Freyja

Oundle Library’s Crime Fiction Book Group is free to attend and lots of fun. We don’t have a set reading list. Instead, we read the books and authors we enjoy and meet once a month to chat about them. It’s all very relaxed! Why not come along to meet us at Oundle Library on the third Friday of each month @ 2.30pm? You’ll be very welcome.