Every picture tells a story 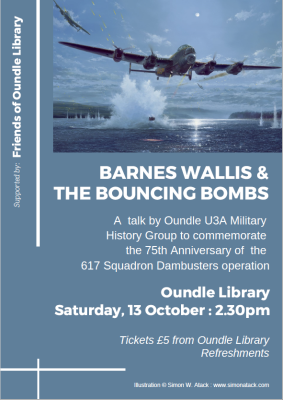 Our poster for the talk at Oundle Library on 13 October ‘Barnes Wallis & The Bouncing Bombs’ shows a picture by renowned aviation artist Simon Atack.

Simon was asked to make a painting of the Dambusters’ raids for the 70th anniversary commemorations in 2013 and he knew he had to find a story to tell. One that hadn’t been covered already by another artist.

During his research he read about Flt. Lt. John Vere ‘Hoppy’ Hopgood DFC and Bar, and the part that he and his crew played in the attack on the Möhne Dam Simon decided this was the story he would paint.

‘I was amazed by the level of courageous determination that Hopgood displayed throughout the raid,’ says Simon. ‘And discovering that he was only 21-years old made it all the more astonishing. It was also the case that, for reasons of wartime morale, Hopgood’s death and the loss of the 53 other RAF aircrew lives weren’t mentioned by Churchill at the time of the Dambusters raids. It felt right that I should do a painting in 2013 to remember Hopgood’s Courageous Run.’

But a painting of a subject like this can’t just tell a story. It has to be both technically and historically authentic as well. Simon is known for his research and for the accuracy of his paintings, so finding the story was only the first step.

‘Everyone knows what the dam looks like and how it was attacked, so that was purely academic,’ says Simon. ‘I decided to portray Hopgood’s Lancaster as she would have looked on her run across the Mohnesee lake, caught in a hail of relentless fire from the two towers on the dam. With all this in my head the painting was in my grasp.

‘As with all my paintings, I researched the weather conditions on the night of the raids; the unusually bright moon and its correct position in the sky. RAF photo reconnaissance flights had been flown over the dams up to the day of the raid to photograph the tide levels, and these helped me get the correct look of the surrounding landscape and the details of the Möhne Dam.

‘Post-raid analysis reports confirmed moonlight, moon position, the rising mists and fog that enveloped the lakes and were seen by returning crews as they left the target areas. Even the testimonies of the German gunners defending the dam were used. Years before, I’d had a meeting with Mr. Karl Schuter, the German gunner whose guns hit M-Mother and he’d provided me with a lot of useful notes from the German point of view of that night/morning.

‘Research like this is what makes my paintings stand out from the rest. For me it isn’t enough to paint a decent study of an aircraft. I want to know that everything else – every little detail – is absolutely correct. A painting is like a piece of symphonic music. It has to be visually beautiful, atmospheric and correctly composed. Without that it’s just another picture.’

When Simon released the painting as prints and limited editions it soon became one of the iconic images of 617 Sqn and the Dambusters raids.

But the story of Hopgood’s Courageous Run doesn’t end there. At a commemorative day at RAF Scampton, Simon met descendants of John Hopgood’s family, including his sister, who later wrote to thank him for everything he’d done to preserve her brother’s memory.

We had no idea the picture we used on our poster to promote the talk at Oundle Library ‘Barnes Wallis and the Bouncing Bombs’ has such a pedigree. The painting tells an amazing story and if you’ve enjoyed it please come along to the talk!