PreviousNext
This is an extremely readable, richly illustrated coffee-table showpiece, packed with images and information. 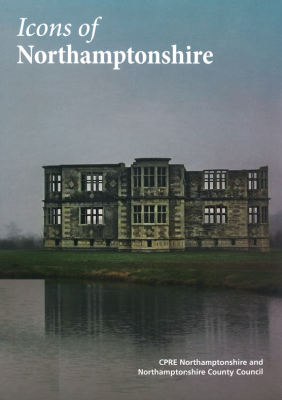 Icons of Northamptonshire is a joint effort published in 2014 by the Northamptonshire branch of the Campaign to Protect Rural England (CPRE), and Northamptonshire County Council. Oundle Library has a copy in its Local History collection and it's a richly illustrated coffee-table showpiece, which serves as a bit of a counterbalance to the troubles the county is facing in the present day.

The foreword, by former Poet Laureate Andrew Motion, lauds Northamptonshire as John Clare’s county, admitting the book is a long-overdue celebration of one of England’s least celebrated counties, and that Northamptonshire is ‘…at once, on the periphery of things and yet central to so much of England’s history and identity.’

The first of the Icons discussed is the Northamptonshire countryside itself, and as David Montagu-Smith explains: ‘This is not a dramatic landscape. But here there is a permanence, a sense of continuity, of reassurance in a world which is everywhere else in a state of continual flux and upheaval.’

Many favourite places and hidden treasures follow. We learn about Fawsley, the deserted Medieval village which thrived up until the 1500s when it was gradually taken over for sheep farming, and the building of Fawsley Hall. And about Geddington, the typical Northamptonshire village of pubs, church and school, as well as the most well preserved Eleanor Cross in the country.

Sir Thomas Tresham whose family involvement in the Gunpowder plot made him notorious, is remembered both by the abandoned hall at Lyveden New Bield, just west of Oundle, and the most extraordinary monument, the Rushton Triangular Lodge near Kettering, which was built as a testament of Tresham’s faith in the Holy Trinity and his Catholicism.

“The entire building revolves around the number three and its multiples. The sides are 33.33 feet long or one third of 100 feet. It is three stories high and has three windows on each side which in turn carry three gables.“

Oundle Market Place is there as well. How many of us who frequent the market every Thursday stop to consider there has been a market in Oundle for more than a thousand years. And not so long ago you could buy cattle, sheep and grain, as well as fruit and vegetables.

In telling the history of the Guildhall and Sessions House in Northampton we also discover the intriguing tale of Elinor Shaw and Mary Phillips, both from Oundle, who were hanged in 1705 after being tried and convicted of witchcraft. Notably they were thought to be the last two women in England to be hanged as witches. Amazingly laws relating to witchcraft stayed on the statute book until 1951!

Icons of Northamptonshire is certainly a book to develop a greater knowledge of the history and geography of our county. It’s also a relaxing way to explore local areas of interest that may have escaped your attention. Definitely worth reading!
Monsieur T